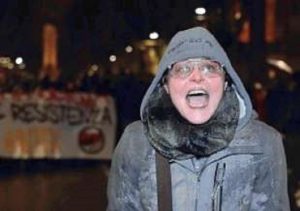 Lavinia Flavia Cassaro did what many do during demonstrations: in her anger, she shouted slogans full of rage and used words that would obviously be out of place in a different context. Yes, she was vulgar, but her manners or lack thereof are besides the point.

Cassaro ended up in the hot seat because she was recorded on smartphones, and then recordings were shared on social media.

During a television broadcast, the former secretary of the Democratic Party and former Prime Minister Matteo Renzi said: “She should be fired immediately”. It is disturbing that a politician would point the finger at a teacher and publicly ask for her dismissal — there are offices and bodies responsible for verifying whether the teacher committed a crime or a disciplinary offense.